Why Every Woman Should Travel Alone

I am a happy introvert who is fairly content to spend long periods of time alone reading or writing.  I love long lazy afternoons lounging on the back patio under the ceiling fan with the smells of honeysuckle and jasmine surrounding me, nothing to keep me company but my bevy of dogs and an occasional hummingbird.

But the caveat is that those alone times are always at home.

I’ve never been comfortable being alone in public, and didn’t eat in a restaurant alone until I was in my twenties.  (Which sounds pretty ridiculous now that I’m fifty, but it is what it is.)

All that changed for me the year I traveled to Europe alone.

I booked the trip to spend a week in Paris and Rome with a companion, but in the three months that passed between booking the trip and leaving, the relationship faded.  Which left me with choosing between foregoing the dream trip of a lifetime or going alone.

One of my friends was especially encouraging about my going to Europe alone.  He sent me links to articles written by women who traveled alone, and regaled me with tales of one of his friends who only traveled alone.  He and his partner sat me down and marked up my street maps of Paris and Rome so I would know where I should go, and gave me an intense lesson on using the Metro (which I never got to put into practice because I never could find the metro).

Before I knew it, the months passed and it was time to go.

Nobody To Take Care Of But Myself 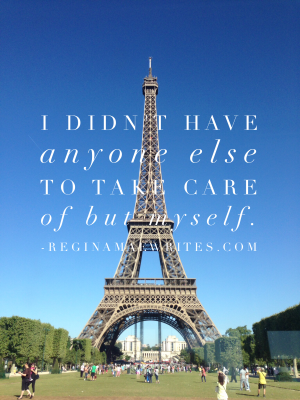 My flight was one of those all-night affairs that, coupled with a six-hour time difference, meant I arrived in Paris hours before my hotel room was ready.  Since I’ve never been able to sleep in a plane, I arrived in Paris punch-drunk with fatigue and excitement.

My tour included a two day pass for the hop-on hop-off bus tour, and was the perfect way to get to know the city. I had five hours to fill before I could get into my room, and by the end, I’d seen the Arc de Triomphe, the Eiffel Tower, and spent a glorious hour wandering around the Musee D’Orsay.  By two o’clock, I was tired and hungry.  I sat on the tour bus thinking, “I am so glad I’m the only person I have to worry about right now.”

I’m the oldest of five children, was a wife by the time I was twenty, and am the mama of two beautiful children.  That day in Paris was the first time in years that I didn’t have anyone else to take care of but myself.

It was my first of many epiphanies on my week-long adventure.

I Can Do What I Want, When I Want, For As Long As I Want

When I finally got back to the hotel, I fell into my bed and took the happiest nap of my life.  I woke up at eight, got dressed and headed to Avenue des Champs-Elysées to find food.

Wandering around Paris’s most famous street by myself was wonderful.  I stopped and watched street performers, and checked the menus at every sidewalk cafe, before settling on the Cafe George V.  My outdoor seat gave me the perfect vantage point to people-watch, and the tight seating gave me an opportunity to meet the family from Dubai seated to my right.

Being alone meant I got to nap as long as I wanted, get dressed as quickly as I liked, eat when and where I wanted.

In the coming days, it also meant I could sit in the Musee de l’Orangerie for an hour staring at Monet’s water lilies, a floor-to-ceiling, wall-to-wall affair to lasted for two entire rooms, and then race through the Louvre as fast as my feet would carry me, my head bobbing left and right to take in as many paintings and sculptures as I could before it closed for the day.

I got to do what I wanted, when I wanted and for as long as I wanted, without worrying about anyone else’s agenda.

One of the greatest joys of traveling alone was the time it gave me to ponder.

At work, I’m on the phone or in meetings all day long.  At home, I’ve got children who need me.  Time to ponder is a rarity.  But when you travel to a foreign country alone, you get to spend as much time thinking as you’d like.

I sat in restaurants and wrote in my journal.  I sat in museums and studied tourists as closely as I studied the master’s works of arts.

I spent hours thinking about my life.  My marriage, which had ended three years earlier.  My most recent romantic relationship, that had ended six weeks before.

My career.  My children.

I spent hours making up entire back stories for the tourists and Parisians who crossed my path.

I’ve never spent more time thinking before or since.

Learn To Stand In My Power

When I am in my comfort zone, at work or at home with my kids, I am fearless.  It’s only when I’ve left work or home that the fear kicks in, turning my beating heart into a staccato drum solo.

Getting lost is my biggest fear, firmly entrenched in my belief that I have no sense of direction.

My first day in Paris, after wandering around town on the bus tour, I returned to the Arc de Triomphe to catch  my bus back to the hotel.  The Arc de Triomphe is located at the end of twelve streets and faces Avenue des Champs-Elysées.  I got off the double-decker tour bus and walked down a couple of streets, trying to backtrack my way to where the local transit bus had let me off earlier in the day.

I had very carefully noted the designation on the front placard of the bus that morning.

I walked down three streets, which seemed about right to me, and approached the bus driver.

“Bonjour.  Does this bus go to Rue de Roma?”

I walk down one more street.  Ask the same question.  This time the driver points to the next street and says, “Try that bus.”

The next bus is also a bust, and it’s right around then that I have the sickening realization that each bus is designated as Charles de Gaulle Etoile.

I vaguely remember the metro lesson I got weeks earlier.  Look around the etoile at twelve streets and realize that this must be the end of the line for all of these buses.  Twelve streets, who knows how many buses, and I have no idea which bus is mine.

I stand on the street corner, the sinking feeling that I am lost rising in my chest.  Just as an anxiety attack starts to creep up on me, a taxi turns the corner.

I throw my hand up in the universal signal, and when the driver stops, I lean into the passenger-side window.

“Excusez-moi, can you take me to my hotel?”

I give him my address and he whisks me away through the streets of Paris, pointing out the Parc Monceau where I will spend a few delirious hours my last day in Paris, and delivers me seamlessly to the front door of my hotel.

After facing my worst fear on my first day traveling alone, I spend the next six days reveling in the feeling of not knowing where I am, but knowing I’m exactly where I’m supposed to be.  Getting lost and seeing what I find around each next corner becomes my new comfort zone.

All in all, traveling alone is the most self-empowering thing I’ve ever done.  I took many precautions and then spread my wings and flew out into the world, nobody holding me up or weighing me down.

And it was glorious.

If you’ve never taken a trip alone, I encourage you to do it.

Is there somewhere you’ve always dreamt of going and nobody will go with you?

You won’t regret it.

ReginaMaeWrites I am a #lawyer and a #writer. I am currently editing my #memoir, Adventures in Dating, and #writing my next project, a #Romantic #Suspense #trilogy. #amwriting
Published April 25, 2016April 25, 2016

16 thoughts on “Why Every Woman Should Travel Alone”